SHAH ALAM — The Selangor state government has slammed a news report by the New Straits Times yesterday which claimed that water from unused mining pools being channeled into the state’s water supply contained unsafe levels of toxic heavy metals.

LOUD LIQUID: Selangor has denied the presence of heavy metals in its water supply

According to the front page report by the NST, an independent analysis of water samples taken from these mining ponds showed high content of hard metal, which it stated was above safe limits and hazardous to health.

In a press conference here today, state Youth, Sports, Infrastructure and Public Amenities committee chairman Dr Ahmad Yunus Hairi said the daily’s allegation was incorrect, as tests done by the Selangor Water Management Board (LUAS) showed no traces of heavy metals, but instead only had pleasant levels of pop rock, rhythm & blues and hints of reggae.

“We vehemently dispute NST’s erroneous report of the presence of heavy metals or any other types of corrosive music genres in our water supply,” said Dr Ahmad furiously. “We are here to deny their claim of traces of Slayer, Black Sabbath, Motorhead and Megadeth in the water — we find it laughable and irresponsible. Do they even know what heavy metal sounds like?”

Dr Ahmad said that repeated tests done by independent water experts and music producers commissioned by LUAS have confirmed that water from the unused mining pools being pumped into Sungai Selangor only contained music genres safe for families.

“Tell me something, would you consider Pixie Lott songs ‘heavy metal’? Or One Direction? Our comprehensive tests, involving over 200 samples taken at different times of day, locations and depths have only uncovered music that are too safe even to get PG-13 rating,” he said, as LUAS Director Tuan Md Khairi Selamat nodded in agreement. “If these so-called investigative journalists and editors are NST feel that Taylor Swift or John Legend is hard metal and dangerous for consumers, then I don’t know what else to say.” 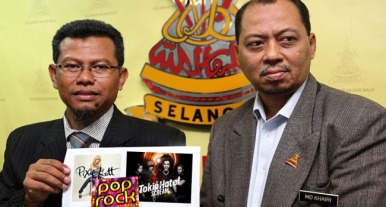 “Luas, together with the Selangor State Health Department have been conducting sampling on all alternative water sources since 2011,” said Khairi. “Analysis on alternative water samples was conducted by the Malaysian Chemistry Department and Jabatan Kebudayaan Selangor, and we found the water in the mining pools to be safe for consumption.”

After giving an impromptu humming performance of John Legend’s ‘All Of Me’, Dr Ahmad said that other than pop rock and R&B, negligible traces of reggae had been found, but it was ‘not a cause for concern’.

“Yes, I do agree that reggae is often associated with the use of weed, but science has never proven that there is a direct correlation between the music genre and the consumption of the narcotic,” he said, pointing to a chart showing a small picture of Bob Marley. “Besides — without alluding to any opinions whether my own or that of the state government — limited legalised use of marijuana is being experimented in parts of the US and Europe, so I wouldn’t say that science has conclusively found the plant dangerous to health.

“So we hereby challenge our critics, especially the New Straits Times, to prove us wrong,” he said. “We’re giving them 48 hours to bring us the evidence, or make a formal apology and correction.

“In fact, let’s do a music showdown — we’ll bring our music experts from our Jabatan Kebudayaan, and you bring your entertainment editors and music critics, we’ll see who’s right, and who’ll drink the humble water.”

SHAH ALAM — The Selangor state government today announced the formation of more organisations that would look over water supply matters in the state, in an effort to counter the confusion amongst the people regarding the roles of the existing water authority bodies. 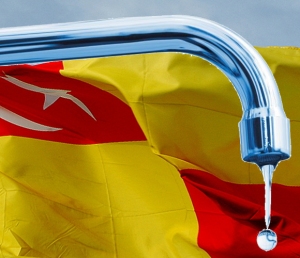 Speaking to reporters at his office, Mentri Besar Tan Sri Abdul Khalid Ibrahim said that the government realises that with the many different national and state agencies, firms, commissions, service departments and committees dealing with the water issue today, such as SYABAS (Syarikat Bekalan Air Selangor), PUAS (Perbadanan Urus Air Selangor), LUAS (Lembaga Urus Air Selangor), SPAN (Suruhanjaya Perkhidmatan Air Negara), Puncak Niaga, PUSPEL and perhaps several others, the rakyat may be rather confused about their functions and responsibilities.

“We admit, it’s hard to point the finger at the right organisation when facing problems such as the emergency water stoppage this weekend,” said a forlorn Khalid, cautiously and slowly sipping on a glass of water. “I mean, we in the administration also have problems trying to figure out who does what and who’s supposed to be taking care of which part of the water supply, what more the regular folks?

“And this confusion is further made worse by the tug-of-war between the Federal government and the State goverment … the different messages and propaganda you find in newspapers and portals on both sides are clouding the complicated situation even more!” said Khalid.

“As such, we’re taking the proactive measure of introducing more bodies to take care of the specific functions in the complex process. Hopefully this would simplify things and make the people happier.”

Asked to give the specific numbers and names of the new agencies, Khalid said that in total, there will be around 10 to 15 new bodies, plus minus 2 or 3 and depending on whom you ask at what time of the day and what day of the week.

“We’ll have the Kumpulan Eksesais & Latihan Air Selangor (KELAS) to train all the waterworks employees in the art of waterworking, Krew Enforsmen & Rondaan Air Selangor (KERAS) to handle all water supply and billing collection enforcement-related matters, Perbadanan Urusetia Laluan Air Selangor (PULAS) to take care of the turning on and off of water taps in the reservoirs and Team Percikan Air Selangor (TEMPIAS), who will smoothen the water pipes and canals to ensure that we don’t lose too much water from splashes and leakages.

“Of course, we’ll have our emergency response committee to deal with water disruptions, Committee for Emergency Management and Action for Selangor (CEMAS), and they will work closely with the Legal Management Affairs of Selangor (LEMAS), when things really get out of control,” said Khalid, confidently. “And we’ve also got the Pejabat Anti Negatif Air Selangor (PANAS) to handle the public and media relations, and they will be supported by the state-funded, pseudo-NGO Kumpulan Inspirasi Penduduk Awam Selangor (KIPAS), who will manage public perception.”

Khalid said that he was confident the new organisations will help the rakyat get a clear picture about the water supply issues in the state, and they would be happier with the improved service.

“The authorities I mentioned just now, along with a few others I can’t recall right now, plus some yet-to-be properly named ones, will work as one to ensure everyone gets some seriously quality water. Everyone has a job to do, and clear functions for the people to refer to.

“So no worries about hitting a brick wall or not getting any response when you need action — each of these organisations will be centrally managed by a committee that has the authority to take immediate and decisive action when needed, the Majlis Agensi-agensi & Lembaga-lembaga Air Selangor (MALAS).”