KUALA LUMPUR — Malaysia has extended an offer to Sochi to help host the XXII Winter Olympic Games, in light of the Russian city’s apparent lack of readiness in organising the event as tweeted by unhappy global media representatives who arrived in their hotels only to find toilets, doors, power outlets and other basic amenities in sorry state. 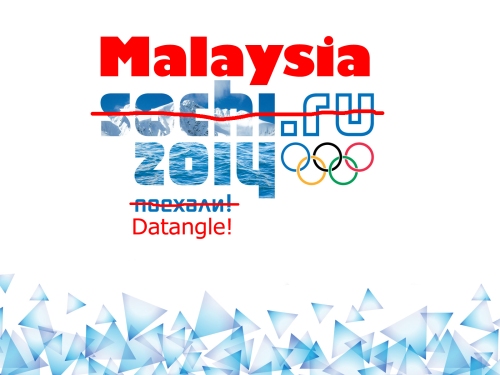 Speaking at Sri Perdana today, Prime Minister YAB Dato’ Sri Mohd Najib Razak said that the widely-known problems faced by the organisers prompted him to come up with the idea of holding the winter games in Malaysia, seeing how “we should always help our neighbours who are in trouble”.

“It broke my heart when I read all those mean tweets and unflattering pictures of construction materials in hotel rooms, yellow-coloured tap water and non-functioning toilet seats,” said Najib. “I know how hard it is to organise an event like this, and I asked myself, what can we do to help a nation in need?

“Suddenly I had an epiphany — if they’re not ready, we’ll do it for them!”

The PM pointed out that Malaysia has all the necessary facilities, infrastructure and weather conditions to run the winter olympics.

“We have so many hotels, all ready to accept the huge number of guests, seeing how it’s not peak period in our tourist calendar. Our airports are primed to receive all our visitors without problem,” said Najib, adding that while KLIA 2 may not be completely functional, “it’s no more ‘complete’ than the Sochi facilities, so it’s not a major step-down for the would-be passengers”.

“Fine, we have summer-based stadiums as opposed to the ice-based facilities in Sochi, but it’s nothing that a little adaptation to the tools cannot fix. How hard is it to change from skis to wheels?”

The PM said that for winter sport events that ‘really, really need’ ice or snow, there are available private facilities which can be used. 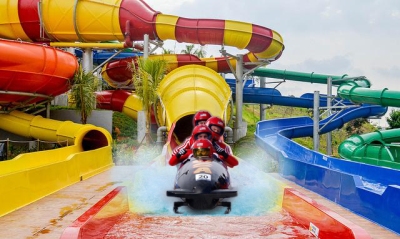 An artist’s impression of an adapted bobsledding

“We have a few winter-based theme parks and arenas for that. The Winter Wonderland at i-City is a marvelous spot that can handle all the wintery stuff people from Canada, Russia, Europe and other icy-places want. The ice-skating rinks at Sunway Pyramid and Mutiara Damansara are also open for business, what more do you want?

“Plus, I don’t see why our world-famous water slides can’t handle the bobsled and luge events,” he added. “In fact, I think the sport will be much more interesting when the sleds end up in the pool of water, creating huge, gigantic splashes. So the points can be based not only on speed, but also on the size of the water splashes.”

Najib, telling the media that he’ll be contacting his counterpart in Moscow to discuss the relocation of the venue, medals as well as tools and officials, also said that those who worried about the stifling heat of Malaysia’s tropical climate need not fret.

“All our facilities are air-conditioned, or at least equipped with good fans and ice-cream stalls,” he said reassuringly. “And in case you don’t remember, the recent ‘cold draft’ that brought down the temperatures in some parts of Malaysia has not left us. You’d still need those nice, thick jackets to walk around in those chilly nights.

Haze blamed on too much bullshit

KUALA LUMPUR — Scientists have confirmed that the thick haze engulfing parts of the Klang Valley is caused by the massive amount of lies, empty promises and misrepresentations generated by different parties in society. 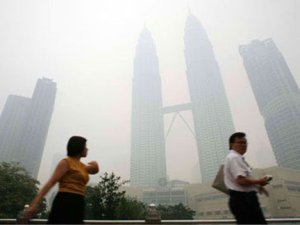 “It’s really all BS,” said Prof. Kamisah Mat Bahrom, lead researcher at Universiti Malaya’s Institut Penyelidikan Alam Sekitar dan Pencemaran. “The plumes of toxic, nauseating smoke that permeate every crevice in the city are a direct result — nay, direct product — of the crap coming out of people’s mouths, especially politicians and the media from all sides, plus quick-rich scheme con artists.

“For years, we were under the impression that the haze is caused by the dry spell exacerbated by ‘hot spots’ of open burning in Indonesia,” said Prof Kamisah. “In actuality, while the fires do contribute to the smoke we breathe every day, most of it is just filthy, unadulterated hot air coming from dishonest mouths and mouthpieces. If you think about it, it’s quite disgusting, not to mention downright unhygienic.”

She continued, “From empty election promises, slander and exaggerated descriptions by politicians, from one-sided media reporting from all sides of the many divides, the obvious bullshit spewed by individuals with fancy titles selling alternative medicines, ingenious solutions to virtually any problem and the moronic stuff said by some so-called celebrities in the rags, it’s amazing how Malaysians have tolerated such crap for such a long time. Bullshit should be a national heritage.”

Prof. Kamisah said that the findings were derived from a project initiated in 2004 that measured and analysed the almost annual occurrence afflicting Klang Valley and at times, the whole country.

“Our team, working with the some international environmental bodies, placed sensors all over Malaysia to collect the polluted air, to merely confirm our hypothesis that the haze is caused by irresponsible open burning. However, beginning 2006, while the satellite images showed that the hot spots around the region did contribute to the smog, we noticed that the samples did not resemble any type of smoke typically originating from forest or agricultural land clearing fires. That was when we expanded our research to find the root cause.”

The researcher said that after 6 years scouring the data, the team reached their conclusion.

“We were, of course, surprised by our findings,” said Prof. Kamisah. “While we’ve all been used to listening to bullshit, horsecrap and hot air coming out of politicians, con artists and the different media, we didn’t think it would be anything that would affect our health. But the research says it all, bullshit kills!” she said angrily, showing the reams of data and charts validating her claim.

“Sadly we cannot reduce the amount or quality of bullshit the country produces every day,” she continued, looking forlorn. “However, our team recommends a two-prong approach to tackling the situation — Protect and Repurpose. 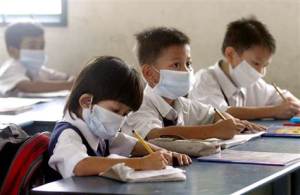 PROTECT: Our young must be educated to filter the dirty bullcrap, validate the information and form their own truths and opinions

“By ‘Protect’, we need to somehow inculcate in our population, especially the young, that they shouldn’t believe everything they hear, see or read. In addition to proper face masks to filter the polluted air, they need to be educated to sift the truths, half-truths and the complete bull dung when dealing with the daily load of ‘news’, ‘advice’ and ‘opinions’ by people especially public figures. They need to be critical and analytical, so that they’re not easily swayed and used like some herd of cows,” said the researcher animatedly.

“And secondly, since we cannot reduce the production of bullshit-induced haze, my team suggests that we use it as an alternative and sustainable energy source. I mean, our nation produces at least 750 million tonnes of bullshit annually, it’d be a waste and even irresponsible to let it dissipate back to nature.”

Prof. Kamisah then showed an artist’s rendition of the “BS reactor”, a large vacuum suction connected to a series of underground facilities that could process the BS-haze and turn it into electrical energy. 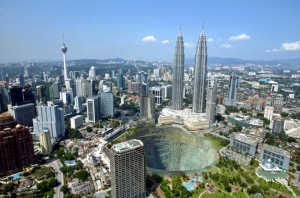 “Our international partners and our institute have put together a grand plan to build 30 such vacuum holes all around the city. We believe that at full mobilisation, the new BS-haze energy could not only contribute significantly to our energy needs and reduce our reliance on coal-based power plants, it can even be exported to our neighbours, creating wealth for our country.

“It may not be ‘clean energy’, what with the dirty lies and horse shit. But it is green, abundant, and absolutely safe. This will be Malaysia’s legacy to mother earth.” 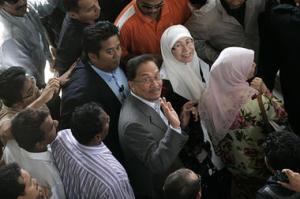 NOTHING ELSE MATTERS: Anwar and Azizah at the courthouse

KUALA LUMPUR — As the much anticipated criminal trial of opposition leader Datuk Seri Anwar Ibrahim began today, everything in Malaysia not related to the proceedings either paused until further notice, or has abruptly ceased to exist. The trial, presided by Justice Datuk Mohamad Zabidin Mohd Diah, will be the only thing that happens in the country anywhere for the next few weeks to a few months, giving other interesting things in life a much-needed break and time off. 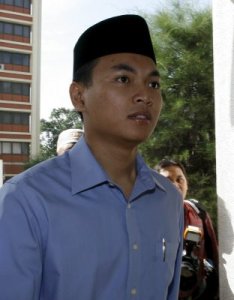 Anwar, the Parti Keadilan Rakyat advisor and Permatang Pauh MP, is accused of sodomising his former aide Mohd Saiful Bukhari Azlan at Unit 11-5-1, Kondominium Desa Damansara, Jalan Setiakasih, Bukit Damansara, between 3.01pm and 4.30pm on June 26, 2008. He is charged under section 377B of the Penal Code which carries a maximum 20-year jail term and whipping, if convicted.

Checks around the capital city and other spots in the country revealed a surreal calm as the population went about their lives without anything interesting — or even mildly sensational — happening. In some areas, things which would normally be considered newsworthy like dirty restaurants or broken signboards have been replaced by white space, not worthy of any attention. This has somewhat affected news organisations.

“We anticipated the impossibly high level of newsworthiness of the trial about a year-and-a-half ago,” said Datuk Azman Ujang, editor-in-chief of Bernama, the nation’s premiere news agency. “So we’ve restructured our manpower allocation to accommodate the new scheme of things.”

Azman added that all the journalists, photographers, camera crew and editors from the other beats, including sports, entertainment, business and lifestyle, have been put on the ‘Sodomy II’ assignment until the trial is over. “We realise that nothing happens outside of the courthouse for as long as the Anwar trial is on. The trial is the only thing that matters. Everyone will be talking only about the proceedings, at the mamak shop, the trains, the offices, over dinners and nothing else… so we at Bernama want to be the premiere source of credible information for all that talk.”

Datuk Wong Chun Wai, Group Chief Editor of The Star, meanwhile said that the publication will institute a temporary shutdown of half its operations until non-Sodomy II things come back to life.

“It doesn’t make business sense to have the mill running at full steam when most of news has disappeared and the universe centres around the trial,” said Wong. “I mean, fuck, man. No other fucking things happen, period. People say ‘no news is good news’, but for a news organisation, it’s a bummer. But that’s what happens when really important things like this takes place.

“We’ve got enough staff manning the fort and covering the event. The rest of the pages will be filled by wire services like Reuters and AP, supplying us international news, which is not affected by the trial at all.”

Meanwhile, Inspector General of Police Tan Sri Musa Hassan said that this is an opportune time for most of the police workforce to clear their annual leave days, seeing that there is no crime, accidents or any other cases for them to investigate during the trial.

“Yes, I’m still on the clock, since I’m supervising the case,” said Musa. “But the rest of my officers can get their rest, seeing that every other bad thing has ceased to exist, evil forces have paused and crime has disappeared. The whole country will have a complete and absolute peace while Anwar’s trial goes on.

“I’m kind of hoping for a long trial, so that my men will come back from their long leave refreshed,” he said.

According to media reports, the nation is holding its breath as it followed everything that happens in the courtroom at the Kuala Lumpur High Court. It is, however, not known exactly how long the nation would be able to hold its breath, although experts say that it could be quite a while, if coupled with gasps of excitement and the occasional “ooh’s” and “aah’s” by the nation’s 26 million-strong population.