DEPTHS OF HELL — The Devil today issued an official denial that he wears any item made by luxury brand, Prada, as implied in the book “The Devil Wears Prada” and movie of the same name.

In a strongly-worded denial made at a Press conference, the Prince of Doom said that he was disturbed that the writers of the fictional story misrepresented him, hurting his already somewhat negative public image.

“I’ll have everyone know that I’m a pretty sensible and practical guy,” said the Lord of Darkness, referring to his fashion sense and shopping principles. “Where do I go to get my clothes? Not high street, for sure. Prada, Gucci and all that are a tad too flashy for me. I’m a Reject Shop and FOS kind of fellow. The max I’d go for would be Marks & Spencer, and I keep that kind of frivilous spending to a minimum of once every couple of months.

“You can check my wardrobe if you want.”

The Devil, who goes by many different names including Lucifer, El Diablo, Satan, Beelzebub, Iblis, Mammon and Suzanne, said that he was dismayed at the lack of respect for his image painstakingly built since he fell from God’s grace.

“I consider myself a pretty consistent fella,” he said. “I may be evil, damned and all, but one thing I’ve never been is flashy and frivilous. I’ve always had this understated style which I began developing a long time ago.

“Besides, being damned and falling from grace don’t get you up high in the priority list when considering budgets. The good guys always get the biggest cut of the pie, and folks like me have to make do with what little leftover pittance we get from HQ. So I can’t exactly afford paying four figures just for a shirt.”

The Devil also added that being in hell affects his choices when it comes to attires.

“Look, I work in a less-than-hospitable environment,” he said, in reference to the fire and brimstone-laden pits filled with decaying souls of the damned. “So for me, it’s not so important to have bling-blings and snazzy designs as opposed to having good heat resistant materials wrapping my body. The ‘breathable fabric developed by Nike last year was pretty good, but it went up in flames the moment I stepped out of my door to get to work.

“That was an embarrassing moment, being naked and all.” 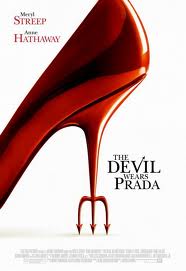 Asked why he didn’t bring this up earlier, when the book was released or the movie, starring Anne Hathaway and Meryl Streep, was released in 2004, the Devil responded that he didn’t mind, until he saw someone’s Facebook update saying that “if the Devil wears Prada, then I wanna be in Hell too!”.

“That was it for me,” said Lucifer, sadly. “I didn’t mind some humans having fun with my name and using some creative license in their fictional work. But when people start believing that life’s all good in Hell, that it’s just a big party with everyone in branded clothes, I had to say ‘Enough!’ It’s a gross misrepresentation of reality, and I take great offence in it!” he said, pounding his flaming fist against a brimstone wall.

“But don’t get me wrong,” he added. “I loved Meryl Streep in the movie, and if I were to appear in a female human form, she’d be a great role model.

“I just don’t agree with her fashion sense.”