According to Dr Bulleau Plëpha, head zoologist the Max Planck Institute for Ornithology, the signs are clearly showing that contesting in the Selangor state constituency was a bad idea, and even if one wins the fight, his career will not take flight.

Cautioning Datuk Seri Anwar Ibrahim (PKR) and anyone else planning to nominate themselves for the N25 ADUN seat, Dr Plëpha said his assessment was based on the fact that the shape of the Kajang constituency is too similar to the dodo bird (Raphus Cucullatus), an extinct flightless bird that was endemic to the island of Mauritius.

RISKY CONTEST: Kajang could spell political extinction to the victor

“The similarity just cannot be ignored,” said Dr Plëpha. “Look at them both … Kajang looks like a silhouette of the dodo, looking up to the sky reflecting on its own sad demise. This scientific deduction can only mean one thing — winning the N25 seat will not augur well for the victor’s political ambitions!”

Dr Plëpha added that the dodo’s lack of fear of humans was the reason it was so easy to be captured and killed. “Some people say it was intrepidness that caused the Raphus Cucullatus’ extinction. It had no issues with fraternising with other species which were their own predators. Fearlessness? I’d say it was foolishness!

“And likewise, trying to ‘win’ this dodo-inspired constituency would be an act of foolishness and political suicide!”

The Kajang state seat fell vacant following the resignation of incumbent assemblymen Lee Chin Cheh of PKR on Jan 27. The Election Commission has announced that it would meet on February 5 to discuss the nomination and polling dates. The state seat comprises 38,965 registered voters. At the last general election in May, 2013, the seat saw a voter turnout of 87.9% with 541 spoilt votes. It has 48% Malay voters, Chinese 41%, Indian 10% and others 1%. In the 2013 general election PKR’s Lee garnered 19,571 votes followed by Lee Ban Seng (Barisan Nasional-MCA) with 12,747 votes and Mohamad Ismail (Berjasa) 1,014 votes.

Dr Plëpha offered his advice to interested contenders: “Should you feel the need to contest in that dodo danger-zone, keep your expectations low. It’s not a thriving place for any bird or fowl, what with Kajang being famous for its chicken satay. Your political outlook may just be similar.” 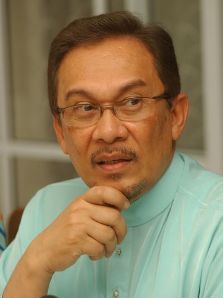 ANWAR: “Putrajaya isn’t the only option”

KUALA LUMPUR — With the general election date looming, Opposition leader Datuk Seri Anwar Ibrahim today said that Pakatan Rakyat’s drive to take over Putrajaya is in full swing. However, he stated that should that goal not be met, the coalition, comprising PKR, DAP and PAS, would be happy to capture Cyberjaya instead.

“We understand that with all the campaign money spent by the other side, it’s an uphill battle to wrestle Putrajaya from Barisan Nasional,” said Anwar at the campaign headquarters in Kelana Jaya to reporters. “What more with constituency demarcations and other naughty things that happen during the elections, we’ve certainly got the odds stacked against us.

“So our strategy is two-prong: should Putrajaya fail, our Plan B is to take its next-door neighbour, Cyberjaya,” he said confidently, as his lieutenants nodded in unison. “It may not be as glamorous as Putrajaya, but it has its charms.”

“Cyberjaya has some good-looking buildings and road designs. I think the Shell building, with its futuristic theme, looks awesome. And the MDeC office building — its homely atmosphere is absolutely a bliss,” he said, showing some A3-sized photos of iconic structures in the IT hub. 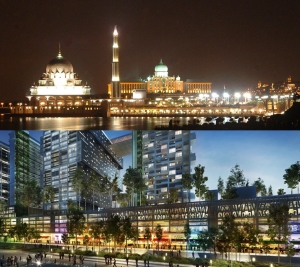 “Fine, Putrajaya has a big lake and a bunch of fancy bridges littering the city, but really, who needs a huge lake with bridges? And Alamanda mall? Cyberjaya’s got Street Mall, baby!” said Anwar, referring to the cluster of various stores comprising Hassan’s Cafe mamak shop, Gomez Polyclinic, Kyros Kebab, Penang Cafe and the odd sundry shop, telco distributor, art shop, print shop, laundry service and other eateries. “And with more shopping centres and office blocks coming up such as de’Pulze, Shaftsbury and Sky Park, it’s a thriving place to be seen at.”

Anwar also pointed out the difference between the Putrajaya population and the residents of Cyberjaya. “While Putrajaya may have the clean-cut family community, Cyberjaya is filled with young and energetic students, thanks to Limkokwing University of Creative Technology, Multimedia University and a few other colleges. This is not counting the young technocrats that make up the population. For goodness sake, Cyberjaya’s got TWO Starbucks within walking distance to each other!,” he enthused.

Answering a reporter’s question about what he’d do if Pakatan fails to capture even Cyberjaya, Anwar gave a firm answer, “Well, there’s always Petaling Jaya, Subang Jaya, TTDI Jaya or even Bertam Jaya, which was formerly known as Batang Berjuntai. So, there’s plenty of options for us. We’re very confident of capturing at least one of those.”

KELANA JAYA — Opposition leader Dato’ Seri Anwar Ibrahim today announced that Pakatan Rakyat will be fielding their ultimate weapon against the Barisan Nasional incumbents in their fight for Putrajaya — perfect election candidates with the necessary physical features, principles and values expected by all voters in each constituency. 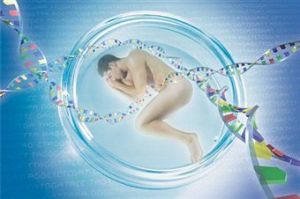 THE BEST INGREDIENTS: Pakatan will field the perfect candidates for GE13

Speaking at a Press conference at the Parti Keadilan Rakyat headquarters, Anwar said that the candidates, grown in secret labs in the past five years, were designed to ‘be everything to everyone’, solving the ultimate challenge faced by politicians of not being able to make every single voter happy.

“We’ve learned from 2008 that we can’t just pick any Tom, Dick and Harry to run for us. The candidates, codenamed PERWARAK for ‘Perfect Wakil Rakyats’, will obliterate BN and end their reign of domination,” declared Anwar, as his lieutenants nodded confidently. “We harnessed the DNAs from our best specimens, cultivated the seeds in petri dishes five years ago and the clones were accelerated into adulthood via our patented GenoXcell™ technology, all ready for the 13th General Elections.

“The 1,000 units — 500 males and 500 females — have matured, and each of them is now in the process of being programmed with the expected knowledge, skillset and political outlook appropriate to the locality he or she will represent. The BN fools are mere natural humans with countless imperfections — they are no match for our flawless candidates!” said the enthusiastic former Deputy Prime Minister, met by the joyous roar of his supporters.

Anwar said that the PERWARAKs embodied the best of Malaysia, and have been shaped to appeal to each voter in their appearance and substance. “The candidates, model XT-43, which are a much improved version of our XT-35 model we tested at one of the by-elections in 2010, were designed to encapsulate the best facial and physical features of the Malays, Chinese, Indians and other races within the country. We even threw in some Scandinavian, African and Latin features in, just to perfect the blend and make them ‘glocal’,” he said, while handing out some mugshots of the candidates. “Perfectly beautiful, aren’t they?” 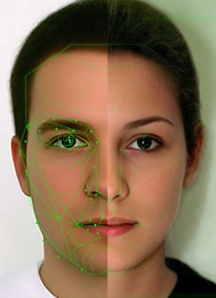 PERFECTION-PROGRAMMED: The facial construction software for the XT-43 is able to create the ideal candidate for each constituency

Anwar pointed out that the features can be tailor-made to please the individual constituency. “For example, in a really urban area where young, trendy voters expect to be represented by one of their own, our candidate can be made to look vibrant, young, tanned and metrosexual. Even the hair can be programmed to be slightly brownish, or mauve, to have that slight hint of modernity. In constituencies with high concentration of more aged population or conservative voters, our candidate will be programmed to be older, perhaps more pudgy to give the impression of ‘experienced’ and ‘trustworthy’. His hair can be slightly thinner and splashed with some silver highlights,” said Anwar, jokingly gesturing towards his own crop, to the delight of those present. “The point is, everything will be programmed pre-election, so it will be completely natural.”

As for the personality, character and skillset of each PERWARAK, Anwar said that the candidates have been fitted with some common core directives and software, in addition to the unique, localised programming. “Yes, candidates in Kelantan will be speaking in Kelate, and the ones sent to Terengganu will be all Ganu Kita,” joked the charismatic leader. “However, each candidate is hard-wired to be honest, passionate, caring, loyal and completely dedicated to the needs of the Rakyat. Of course, they’re also pre-programmed to be loyal to the Pakatan Rakyat coalition,” he said, sternly. “We wouldn’t want any party-hopping now, do we?”

To stress his point, Anwar said that the PERWARAKs have been designed to abhor corruption and bribery. “Their basic Operating System does not recognise the value of greed and self-glory. So BN can forget about buying them over. They’re completely bribe-proof. In fact, each candidate have been fixed with a self-destruct device which would be enabled if they even consider being a turncoat.

“But don’t worry, the self-destruct process is fully internal — they’re not going to blow up in public or something,” said Anwar, referring in jest to the XT-35 model whose head exploded in a crowded area, injuring five bystanders after thinking about changing camps in Perak two years ago. “This time, any ‘defective’ candidate will just have their internal organs disintegrate quietly, so the public is completely safe.

“And talking about safe, the candidates are also designed to not die without justification. We’ve had enough inconvenience of by-elections triggered by the deaths of MPs and ADUNs, so our PERWARAK batteries are perpetual-powered. They’ll last virtually forever, or until the next model comes out.”

When asked what would happen to all the ‘natural human’ candidates within Pakatan Rakyat when the PERWARAKs take their jobs, especially the Prime Minster position, Anwar said that these are sacrifices PR leaders are willing to make for the benefit of the rakyats. “We’ll take the back seat of the country’s administration and let the perfect YBs do the work. They have all the necessary qualities to do a great job, so we can depend on them. And if they don’t, we’ll just turn them off remotely.

“They may be sitting in the EXCOs and Parliament, but we’re still their boss. So they’re kinda like ‘Wakil kepada Wakil Rakyat’ (representatives to the representatives). It’s a win-win situation — the PERWARAKs will be running around solving the country’s problems, while we’ll run the country from the comfort of ur homes,” said Anwar. “We’re all about balance, so quality family time is very important to us.”

BN chairman Prime Minister YAB Dato’ Seri Mohd Najib Razak declined to comment on the latest development, however an unnamed source within the coalition confirmed that they were working on a technology to counter the PERWARAKs, including the use of high intensity Electro-Magnetic (EM) disruptor guns to crack through their firewall, disable their software and render them useless. “Yeah, they’ll still be the good looking, perfect glocal-global-whatever-featured specimens, but imagine them just standing there at the podium, unable to deliver their speeches, looking like complete idiots. That’ll be entertaining,” said the source.