LOS ANGELES — Phillip Phillips, the season 11 American Idol winner said that with the recording contract he’ll sign and consequential high income he’ll command, he’d finally be able to buy his own first name, after having to borrow his family’s surname as his first name for the last 22 years. 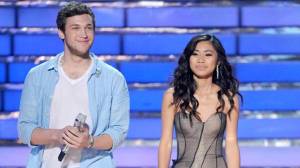 “When my folks had me, they were just fresh out of college, starting out their lives so they couldn’t afford to get me a real first name,” said Phillips, gesturing towards his proud parents sitting in the audience after the announcement was made on Wednesday night that he had beaten fellow Idol finalist, Jessica Sanchez. “The choices were limited then — they could either borrow, beg or steal a first name for me, so they decided to borrow from the family. Of course I don’t hold anything against them for it, things were tough back then,” he added, blowing a kiss to his mother.

“Now the first thing I’ll do when I get my recording contract advanced payment is to walk over to the National Registration Department and get my own name. I can’t wait to say goodbye to my pseudonym, Phillip,” said Phillips, reflecting on the difficult years in school being teased for having the same first and surnames. “I mean, Phillip is a wonderful name. But the fact that it’s just borrowed from a last name, that’s kinda taken the good vibe out of it. I felt like I was ordinary. It was tough. I had only one friend throughout high school who sympathised with my predicament, I’ve always wished for the day when I could change it.

“This win’s for you, Michael Michaels. We did it, buddy!” yelled Phillips into the camera, wiping tears from his cheeks.

Phillips continued, “It was bad enough to be called ‘stutter name’ or ‘carbon copy kid’. When I tried to alleviate the problem by just using my initials ‘PP’, they called me ‘PeePee’. I was traumatised.”

Fellow finalist Jessica Sanchez said that while she was disappointed that she didn’t win the show, she was inspired by Phillips’ success story. “I know how hard it is having a borrowed name — for a few years my best friend in school was stuck with the name Willow Willows. Fortunately in senior year, her parents bought her the first name ‘Wendy’, so she could start over her life. But not everyone was as lucky to have been able to afford a new name.

“Despite his handicap, Phillip proved that he could break through the discrimination and social stigma. I can’t think of a better person to beat me in the show. Congratulations!” said Sanchez, hugging Phillips.

Phillips said that he hopes to finalise his name purchase and registration before he releases his first album. “It would be a good start to my career. Yes, my fans and the American Idol voters know me as Phillip Phillips, but I don’t think having a different first name will affect their support.

“Artistes change their names constantly, and their fans didn’t leave them. Look at The-Artiste-Formerly-Known-As-Prince-Then-Changed-Into-A-Squiggly-Symbol-And-Now’s-Back-As-Prince. He still sells records. It’s all about the music.”

Asked what his new first name would be, Phillip Phillips admitted that he had not finalised his choice as yet, having been tied up with winning the show and all. “Honestly I haven’t been able to lock in to one name, I’ve got a few choices flying in my head,” he said, apparently overwhelmed by the turn of events. “I’d need to think about this carefully, my first name will determine my career success,” he stated, seriously.

“I’ve always liked ‘Alejandro’ and ‘Maximillian’. My folks did want to name me ‘Benjamin’ when I was born, but they couldn’t afford it. So maybe I’ll use all three.

HOLLYWOOD — American Idol season 10 first runner up Lauren Alaina has announced that she will have her revenge against winner Scott McCleery very soon. 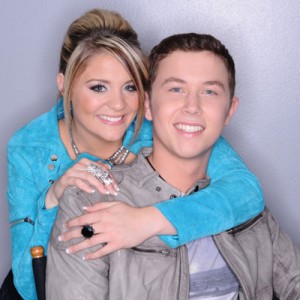 A CHOKE TOO LOOSE: Alaina wished she had finished him off earlier when she had the chance

Speaking right after the finale show, where McCleery took the title after a nationwide vote, Alaina said that ‘the prick will get it, for sure’.

“Yeah, that’s right. ‘Runner Up’. That’s just another word for ‘ Freaking Loser’,” said the 16 year-old, angrily. “Everyone knows that crown’s supposed to be mine, and not that country bum. MINE!

“I mean, come on! I’ve got more talent and charisma in my middle finger than that Elvis impersonator’s whole body. This is a gross miscarriage of justice,” she added, while flipping the said finger to reporters.

“One thing for sure, I ain’t taking this lying down. If that boring butthead thinks he’ll be enjoying his ‘well-deserved’ win, he’s got another thing comin’,” she continued. “It’s not fair, the world knows it, and I’ll make sure he pays for this humiliation. Oh yeah.”

Alaina then proceeded to describe her elaborate scheme.

“The first thing is to start a psych internet warfare. At this very moment, my cybertroopers have begun planting propaganda materials on that skinny bastard on every known site and possible database. My team — Team Alaina! Woohoo! — had spent the last few months collecting all sorts of dirt on each of the Top 12 for this purpose. Now, it’s time to use it. The world will see what kind of an asshole he is,” she said excitedly, before breaking into a loud, shrieky guffaw. “By the time he’s done, that boy will be wishin’ he’s back in his little town, milkin’ cows, y’all.”

Taking out a poster of the 17-year-old McCreery and tearing it in half, Alaina continued, “And if that doesn’t kill him, we’ll deploy our aerial attacks and smart cruise missile assault campaign. My nuclear submarines and aircraft carrier combat fleet are at Defcon-2 level, parked at the coastline waiting for my orders. All it takes is just me giving the go-ahead and that mo-fo’s toast,” she said, snapping her fingers.

“We all know why he so-called ‘won’, right?” asked the teenager from Georgia. “It’s those stupid tweens, that’s why! Dumbass little schoolgirls who couldn’t tell the difference between real talent and flannel-wearing rednecks with Darth Vader’s voice. They’re the ones who made up the majority of the 100 million voters. Parents gave ’em cellphones to call home, and these morons blow their money on voting for prettyboys.

“Not that I’m saying Scott’s pretty. Ew. He looks like my uncle. And I hate my uncle,” she murmured, breathing heavily while slowly shearing McCreery’s torn poster into little pieces with a hunting knife.

“Anyway, ‘Congrats’, Scottie. Enjoy your five minutes of fame. If I were you, I’d check under my car for anything suspicious before I turn on the engine.”