KUALA LUMPUR — Leading zoologists in Malaysia have reached a consensus to reclassify the Mat Rempit as a new species, following extensive studies that found no trace of any brain matter in their heads, other than small clumps of ganglia that control their basic motor and reproductive functions.

NEW SPECIES: The rempitus moronicus is now in the same group as other brainless animals such as the sponge, jellyfish and clams

Speaking at a biology conference in University of Malaya today, chairman of the Malaysian Association of Zoological Sciences Datuk Dr Ismail Masaran said that the mat rempit, or new scientific name rempitus moronicus, are in the same group as the sponge (the porifera phylum), the starfish (echinoderms), jellyfish (cnidarians) and common shellfish such as molluscs and clams.

“It is truly an exciting day for us,” said Dr Ismail as he revealed key findings from the studies. “After decades of miscategorisation that caused so much confusion in the zoological community, finally we have a more complete and clear understanding of this beautiful creature. Our discovery of the rempit’s brainlessness has provided much needed explanation for this species’ idiotic behaviour on the road and complete disregard for personal safety as well as that of other road users.”

Explaining the multi-university team’s RM7 million research that began four years ago, Dr Ismail said that the results were much more than they had anticipated. “Initially we wanted to know why the rempit — then erroneously treated as part of the homo sapien family — displayed many behaviours which were unnatural to human beings, such as performing unnecessarily dangerous stunts, aversion to safety tools like helmets as well as violent allergy to good manners and common sensibilities. We were mystified by the way these beasts showed no interest in the preservation of their own lives and limbs.

“Our first hypothesis was focused on psychology; we thought there was something wrong with them psychologically. However, through 3D scans done on their heads, we found that the abnormality is actually physiological — they’re just different creatures altogether,” said Dr Ismail. “We wanted to observe the neurons firing when they’re exposed to different stimuli, but when we saw the scan, there was virtually nothing there but empty space. They’re apparently just built like that.”

Dr Ismail said that to know more, the team decided to conduct a physical examination.

“It was quite challenging to do a physical invasive examination,” said Dr Ismail. “Rempits are mostly nocturnal and are quite elusive creatures, so a good sample was hard to come by.

“Fortunately, we were able to secure some sample rempits — one male ‘Mat’ Rempit and one female ‘Minah’ rempit from hospitals in Selayang and Klang, so we cut them open. The first thing we noticed was how thick the skulls of these rempits are,” said Dr Ismail, as other researchers in the team nodded in agreement. “The skull wall was so thick there was hardly any room inside for a brain, even if the rempits wanted to have one. In a way, this explains why some of them are so relaxed about wearing safety helmets — other than the skull being so strong, there is really nothing valuable inside to protect.” 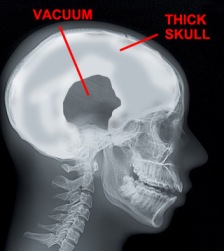 FULL YET EMPTY: Head scan of a rempit sample

The lead researcher concluded that the newly discovered species’s lack of brains is both a curse and a blessing.

“On one hand, their inability to make intelligent decisions and tendency to risk their lives unnecessarily have made road accidents almost a natural, expected thing amongst the rempit community. It’s a cruel fate, but it’s nature’s way of controlling their population — by letting them kill themselves. But on the other hand, their lack of intellectual capabilities means they make their decisions based on impulse — and we all know what’s the strongest impulse for this kind of wild animal.

“Other than behaving like complete idiots on the road, they just end up doing nothing but breed. So I guess it evens out.”

Dr Ismail said that this new reclassification has had an impact in how authorities deal with the species.

“We shared our research with the authorities. As a result, the police has handed over the role of regulating these creatures to the Wildlife Department. The forest rangers will take care of the species welfare and habitat, as well as controlling their migration pattern. To maintain a balance in the ecosystem, their interaction with other species — especially with human beings — will have to be monitored, considering their destructive behaviour. 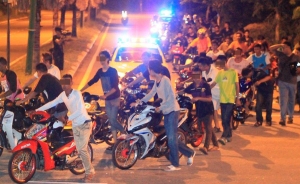 BETTER REGULATED: Thanks to the reclassification, now rempits are regulated by the Wildlife Dept, here shown directing a herd of rempit in their nightly migration

“Should their numbers be too high, I would recommend effective population control methods such as neutering and in extreme cases, culling.”